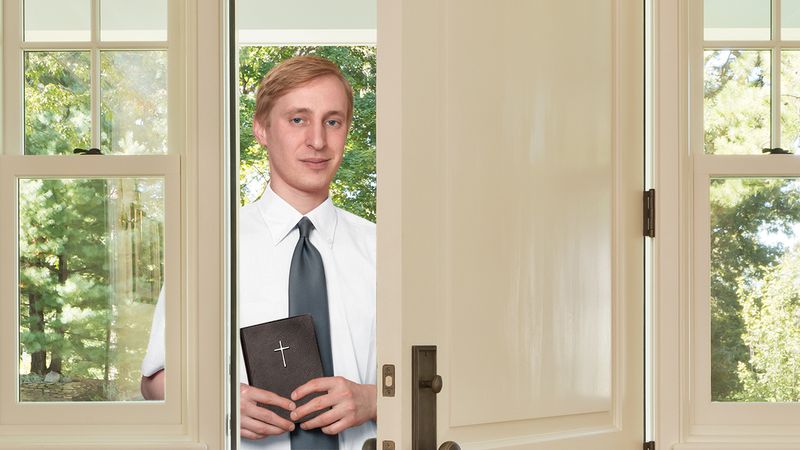 1.     The Holy Spirit is simply Gods active force not a person.

2.     JW Claim: The concept of the trinity is confusing and false.

4.     JW Claim: Man doesn’t have a soul or spirit that lives past the death of the body.

THE BIBLE SAYS: The kingdom was set up on the day of Pentecost as described in Acts 2. Revelation 20 is a symbolic passage showing the persecuted disciples of the first century that their cause would soon triumph over persecutors. THE SYMBOLS OF THIS BOOK CANNOT BE FORCED INTO LITERAL INTERPRETATION.

6.     JW Claim: The 144,000 depicts a literal number of spiritual Jehovah’s witnesses who will go to heaven, leaving the rest of the witnesses on earth for eternity.

THE BIBLE SAYS: This number in context with Revelations 7, and 14 depicts all of the redeemed on earth who were undergoing that persecution, and who were going to be protected by GOD. If the Jehovah Witnesses are going to take the number literally, then they need to take the rest literally as well. In this case the 144,000 are all JEWISH MALE VIRGINS! As to the rest remaining on earth, there will be no earth on which to remain (2 Peter 3:10-12)!!!!

Notes: The Jehovah Witnesses were founded by Charles Russell in the late 19th century and are still operating today from the “WATCHTOWER BIBLE” and “Tract Society” in Brooklyn New York. They have experienced remarkable growth around the world by going door to door, canvassing, and extensive distribution of literature. The are widely know for using only their translation of the bible, for their literal interpretation of the book of revelation, their opposition to blood transfusions, for their refusal to salute the American flag or serve in the military, and for their willingness to engage in endless genealogies about the more difficult passages of the bible. Their central message was that JESUS WAS SOMEHOW OUR SAVIOR BUT HE WAS NOT FULLY GOD.

According to their doctrine, Jesus is a lesser “god” or Godlike creature, or more specifically an Arc angel. This view is totally Heretical since the early centuries of Christianity when a man named “ARIUS” said of Jesus that “there was a time when he was not.” The Entire Jehovah’s Witness doctrine is simply stated the “ARIAN HERESY” resurrected. IT MUST BE REJECTED TODAY!

Isaiah 9:6-7 speaks to the eternal nature of Christ. This child who would be born and sit on David’s throne is JESUS. This same child is called “MIGHTY GOD” and “EVERLASTING FATHER”. Wow child as well as father? This totally refutes their doctrine. The Jehovah witness dodge on this passage is that Jesus is “mighty” GOD but not the almighty. However the same term is applied to Jehovah God in Isaiah 10:20-21. Further, Micah 5:2 indicates the ruler who would come from

Bethlehem was one who’s going forth are from long ago from the days of eternity (NASV). Isaiah 43:10 and 44:6 makes it clear that there was no God but Jehovah (LORD in the NIV). Either the term “Jehovah” from the original term “Yahweh” refers to the trinity (FATHER, SON, and SPIRIT) or JESUS IS NOT DEITY, JESUS IS NOT GOD! The Jehovah’s Witness claim that Jesus is not God is unbiblical Polytheism. Jesus is called God in John 1; 1, 20:28; Titus 2:13; 2 Peter 1:1 and 1 John

Although Gods word commands every generation to live in anticipation of the end of the world- be ready- it’s simply impossible to pinpoint the end times of earths history.

– When Jehovah Witnesses, Premillenialis say they take the bible literally they mean they try and take literally the book of revelation and other parts of the bible.

Definition of terms: Literal- Straightforward not symbolic at all: Luke 8:26 “they sailed to the region of gerasenes.”The word “sailed “means they traveled by boat, a sail being filled and pushed by the wind. It does not mean figuratively that they sailed a crossed the sky, sailed in their minds, or that their friends hallucinated the transit.

-Figuratively: Symbolic, metaphoric, not literally: Psalm 91:4 “He (GOD) will cover you with his feathers, and under his wings you will find refuge.” Here Gods wings symbolize his concern care and shelter for his people. God doesn’t literally have wings (or an arm, or a mouth etc…) but that doesn’t mean the passage is incorrect. Figurative passages are normal in Bible poetry, and prophecy..

Literalistic, or legalistic: Taking figurative passages literally. In the previous passage God would have real feathers; either physical birdlike feathers etc… this is RUBBISH!

Face Value: Taking the natural sense of a passage. We take literal passages literally, figurative passages figuratively. Bottom line we take the bible at face value to avoid confusion of the literalistic approach. Literalistic approach leads to many abuses, particularly the book of revelations.

Under the leadership of Nathan H. Knorr (1905-1977) the WT Society put away date setting for a time and switched to a different strategy. Since many of their teachings could be refuted by key verses in the Bible, Knorr set out to publish a different Bible for JWs to use. Called the New World Translation (NWT), it blatantly altered many verses to support Watchtower doctrine. The single best example of this is John 1: 1, which in the King James Version clearly declares Jesus’ deity-“the Word was God.” JWs deny the deity of Christ, so the NWT renders this phrase “the Word was a god.” The translation committee responsible for the NWT was kept anonymous, undoubtedly to cover up their complete lack of scholarly qualifications. None of the men who worked on this project had any formal training in the biblical languages, except for Frederick Franz. He was chairman of the committee and had studied Greek for two years at the University of Cincinnati without graduating, and was only self-taught in Hebrew. After Knorr’s death, Franz became the Watchtower Society’s new President.