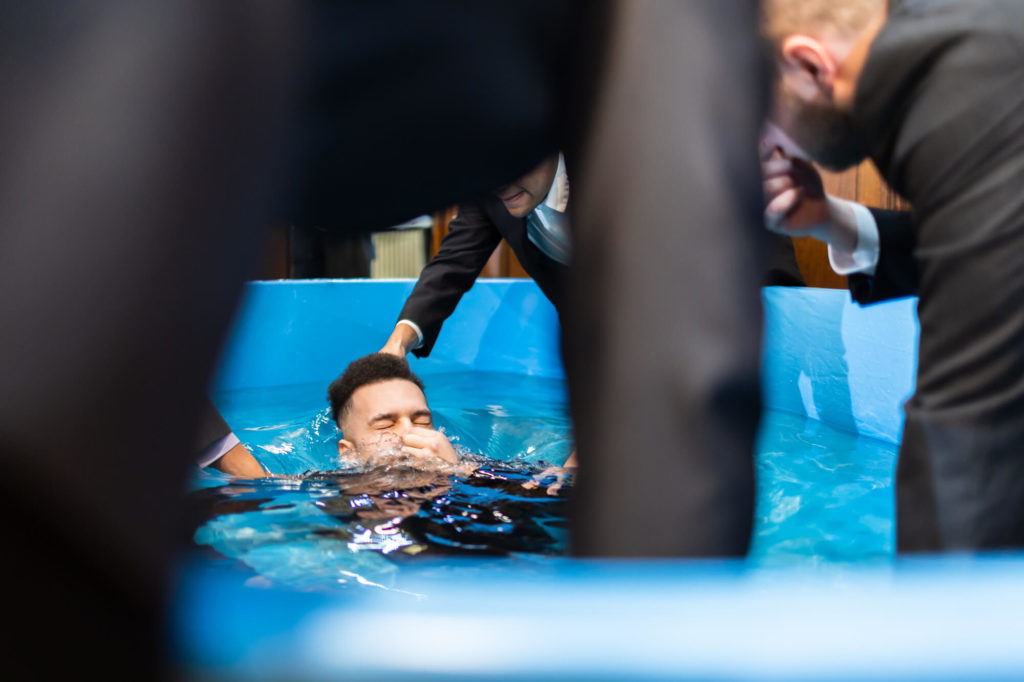 Baptism – Why All The Confusion

Do I need to be baptized to be saved? What does the Bible say about baptism?

Let us start with looking at the teaching of the oldest church in the world, the Catholic Church. What do they teach?

“We believe in the Holy Spirit, the Lord, the giver of life, who proceeds from the Father and the Son.

With the Father and the Son he is worshipped and glorified. He has spoken through the Prophets.

We believe in one holy catholic and apostolic Church. We acknowledge one baptism for the forgiveness of sins.

We look for the resurrection of the dead, and the life of the world to come. Amen.”

Their belief is that baptism is for forgiveness of sins, the point of salvation. However, they taught that if children were baptized they were saved at that point. This then went on to be the teaching of the Church of England, Presbyterian and many other traditional churches.

What is taught in most evangelical churches today?

Romans 10:9: If you declare with your mouth, “Jesus is Lord,” and believe in your heart that God raised him from the dead, you will be saved.

This verse alone, taken out of context, has been used to support the belief that all you need to be saved is to believe in Jesus and say out loud, “Jesus is Lord.”  This is often called the sinners’ prayer. Yet when put into context it teaches something very different.

Romans 10:1-14:  Brothers, my heart’s desire and prayer to God for the Israelites is that they may be saved. For I can testify about them that they are zealous for God, but their zeal is not based on knowledge. Since they did not know the righteousness of God and sought to establish their own, they did not submit to God’s righteousness. Christ is the culmination of the law so that there may be righteousness for everyone who believes.

Moses writes this about the righteousness that is by the law: “The person who does these things will live by them.” But the righteousness that is by faith says: “Do not say in your heart, ‘Who will ascend into heaven?’” (that is, to bring Christ down) “or ‘Who will descend into the deep?’” (that is, to bring Christ up from the dead).  But what does it say? “The word is near you; it is in your mouth and in your heart,” that is, the message concerning faith that we proclaim: If you declare with your mouth, “Jesus is Lord,” and believe in your heart that God raised him from the dead, you will be saved. For it is with your heart that you believe and are justified, and it is with your mouth that you profess your faith and are saved. As Scripture says, “Anyone who believes in him will never be put to shame.”  For there is no difference between Jew and Gentile—the same Lord is Lord of all and richly blesses all who call on him, for, “Everyone who calls on the name of the Lord will be saved.”

Let us put verse 9 into context. In verse 1, who does it say it is written to? Brothers, the Christians in the church in Rome.

What is the issue? Paul is talking to the Christians about converting the Jews. They were zealous, but their knowledge was wrong. This is not a passage written to Gentiles about how to be saved, but to Christians about how to save the Jews.  It focusses on getting Jews to believe Jesus is Lord. Notice there is also no mention of repentance, and we know that we also need to repent in order to be saved (Luke 13:5; Acts 26:20-21).

So how do we clear the issue up?  Let us take a look at what 3 people said about baptism, forgiveness and salvation.

1) What has Jesus said about it?

2) What has the Apostle Peter said about it?

3) What has the Apostle Paul said about it?

John 3:3-7: Jesus replied, “I tell you, no one can see the kingdom of God unless they are born again.”

“How can someone be born when they are old?” Nicodemus asked. “Surely they cannot enter a second time into their mother’s womb to be born!” Jesus answered, “I tell you the truth, no one can enter the kingdom of God unless they are born of water and the Spirit. Flesh gives birth to flesh, but the Spirit gives birth to spirit. You should not be surprised at my saying, ‘You must be born again.

Jesus said that to be born again there needed to be water present.

Mark 16:16: Whoever believes and is baptized will be saved, but whoever does not believe will be condemned.

Jesus said you need to be baptised to be saved.

Acts 2:38: Peter replied, “Repent and be baptized, every one of you, in the name of Jesus Christ for the forgiveness of your sins. And you will receive the gift of the Holy Spirit.

1 Peter 3:20-21: to those who were disobedient long ago when God waited patiently in the days of Noah while the ark was being built. In it only a few people, eight in all, were saved through water, and this water symbolizes baptism that now saves you also—not the removal of dirt from the body but the pledge of a clear conscience toward God. It saves you by the resurrection of Jesus Christ…

Here, Peter also teaches in that baptism saves you.

Romans 6:3-4: Or don’t you know that all of us who were baptized into Christ Jesus were baptized into his death? We were therefore buried with him through baptism into death in order that, just as Christ was raised from the dead through the glory of the Father, we too may live a new life.

Colossians 2:12: …having been buried with him in baptism, in which you were also raised with him through your faith in the working of God, who raised him from the dead.

The Apostle Paul teaches that we are raised to a new life after baptism, not before. (The thief on the cross was under Old Covenant, which is why he did not need to get baptised; Jesus had not yet risen or even died.)

1 Corinthians 12:12-13: Just as a body, though one, has many parts, but all its many parts form one body, so it is with Christ. For we were all baptized by one Spirit into one body—whether Jews or Gentiles, slave or free—and we were all given the one Spirit to drink.

The Apostle Paul teaches we enter the church at baptism, so if baptism is not for salvation that means we would be saved but not counted as in God’s church? Does that make sense? No!

Galatians 3:26-27: So in Christ Jesus you are all children of God through faith, for all of you who were baptized into Christ have clothed yourselves with Christ.

The Apostle Paul teaches that we are clothed in Christ at Baptism, that when God looks down at us he no longer sees us as sinful but clothed in perfection and therefore able to stand in his presence.

In fact when we see how Paul recalls his own conversion:

When they heard him speak to them in Aramaic, they became very quiet.

Then Paul said: “I am a Jew, born in Tarsus of Cilicia, but brought up in this city. I studied under Gamaliel and was thoroughly trained in the law of our ancestors. I was just as zealous for God as any of you are today. I persecuted the followers of this Way to their death, arresting both men and women and throwing them into prison, as the high priest and all the Council can themselves testify. I even obtained letters from them to their associates in Damascus, and went there to bring these people as prisoners to Jerusalem to be punished.

“About noon as I came near Damascus, suddenly a bright light from heaven flashed around me. I fell to the ground and heard a voice say to me, ‘Saul! Saul! Why do you persecute me?’

“ ‘I am Jesus of Nazareth, whom you are persecuting,’ he replied. My companions saw the light, but they did not understand the voice of him who was speaking to me.

“ ‘Get up,’ the Lord said, ‘and go into Damascus. There you will be told all that you have been assigned to do.’ My companions led me by the hand into Damascus, because the brilliance of the light had blinded me.

“A man named Ananias came to see me. He was a devout observer of the law and highly respected by all the Jews living there. He stood beside me and said, ‘Brother Saul, receive your sight!’ And at that very moment I was able to see him.

“Then he said: ‘The God of our ancestors has chosen you to know his will and to see the Righteous One and to hear words from his mouth. You will be his witness to all people of what you have seen and heard. And now what are you waiting for? Get up, be baptized and wash your sins away, calling on his name.’

We see that although Paul:

he did not have his sins washed away until baptism, and it was there that he called on Jesus’s name, the same “calling on his name” referred to in Romans 10:9, because his issue was to believe that Jesus was in fact God, not man.

If baptism is not for the forgiveness of sins and therefore not the point of salvation, we must be able to explain away why Jesus, Paul and Peter all thought it was.

The pressure is on those who believe baptism is not for the forgiveness of sins to explain why. This was the doctrine of the early church in the book of Acts, the recorded doctrine in the early church as well as in the Catholic Church. In actual fact, this has been taught for thousands of years throughout all churches until the relatively new teaching of simply praying for forgiveness of sins was introduced just a couple of hundred years ago.

We must simply get back to what

And ultimately, what God and his word say about baptism!

Have any questions about this Bible study? Contact us here!

Check out the other Bible studies…